honorary degree ceremony puts it all in perspective

Earlier this week, nearly 70 years after an executive order called for the unjust relocation of coastal Japanese Americans, San Diego State held the first Nisei Honorary Degree Ceremony to honor those students whose higher education was interrupted by Executive Order 9006.

Bob H. Suzuki, a formerly-interned Japanese American and President Emeritus of Cal Poly Pomona, offered a poem that put the entire event in perspective and made me realize why this ceremony doesn’t just impact Japanese Americans, citizens caught up in the war, or families of relocated students; it impacts all of us.

We still live in a world where discrimination rules certain groups and sitting back until we’re the victim is no way to make a change in the world. The degree ceremony represents a step forward to offer retribution to this group of students and honor their accomplishments. Projects such as this provide hope that a voice can be found for persecuted groups who deserve honor and respect for what they have gone through.

Although their time at SDSU was interrupted, a majority of the students persevered, earned their college degrees, and went on to create thriving businesses, raise healthy families, and pursue their dreams. Today students fall back on excuses – such as not being able to get classes, paying higher fees, and sitting in old facilities – that hinder our educational goals. But imagine the passion and drive it took these students to overcome such an undeserved obstacle and break through barriers to move on and not let anything stop them. 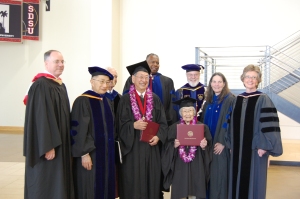